We are now doing in-office conferences and signings and, with strict COVID guidelines as well as telephone and Zoom. Whether it is remote or in-person we are here to carry out our mission to help and serve our clients.
Our Legacy is Protecting Yours
Contact Us Now
William S. Wilson
Attorney 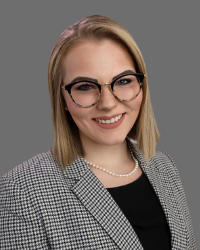 Attorney, Alyx Durachta, joined Wilson & Wilson in 2019. Alyx began working in the Estate Planning and Estate Administration area of law in 2016. In addition to practicing in this area, Alyx participates as a volunteer attorney for the Wills for Heroes Foundation which provides essential estate planning documents to our nation’s veterans and first responders.

Alyx received her B.S. in Criminal Justice (2014), and a Graduate Certificate in Homeland Security and Emergency Management (2015) from Indiana University Purdue University Indianapolis (IUPUI). Upon completing her graduate program at IUPUI, Alyx moved to Chicago where she attended The John Marshall Law School and received her J.D., as well as a J.D. Certificate in Alternative Means of Dispute Resolution (2018). During Alyx’s tenure at JMLS, she was an active participant in the Trial Advocacy and Dispute Resolution Honors Board and Council. Upon graduation, Alyx was nationally recognized and selected to become a member of The Order of Barristers based on her excellence in oral advocacy and brief writing.

Alyx has remained an active alumna of her alma mater, JMLS. Since earning her J.D., Alyx has become an adjunct faculty member of JMLS, coaching student teams in the Trial Advocacy and Dispute Resolution program. Alyx prides herself in the success of her teams, and enjoys helping the students become better advocates and future attorneys.

When Alyx is not practicing law, you can find her spending time with her nephews and niece, running on the lakefront, or living out her “shop til’ you drop” mindset.

Articles
Contact Us
Practice Areas
Newsletter Signup
Sign Up to Receive our Free Newsletter
Client Reviews
★★★★★
"We just received the refund from the facility today. Thank You so very much for all your help with my Mom's file. You and the staff at Wilson & Wilson Estate Planning & Elder Law LLC are outstanding people. It is an Honor to have your law office represent us. I would like to keep in touch with you for future family business." Lou Spataro
★★★★★
"I have known Bill Wilson for years and referred the services of Wilson & Wilson Estate Planning & Elder Law LLC Law Offices to many of my clients. I know they will be met with compassion as well as excellent counsel which is important to families in stressful situations. Dealing with the families in crisis requires skills all of the staff at Wilson & Wilson Estate Planning & Elder Law LLC demonstrate every day." Andrea Donovon
★★★★★
"Bill and his team are outstanding! They are thoughtful, caring and able to handle virtually any estate-related matter. They can take complicated matters and make them simple to understand. And on simple matters, they get it done quickly and for a reasonable fee. I highly recommend the Wilson & Wilson Estate Planning & Elder Law LLC team." G.Grant Dixon III
★★★★★
"Dear Ms. Rabuck, Please accept my sincere appreciation of your involvement and efforts in this case. You have been most understanding, competent and patient as we pursued this matter over the last several months." Robert N. Milano
★★★★★
Gentlemen: "Your office has served me well. Ms. Anne J. Rabuck did an outstanding job of bringing my mixed estate to an orderly conclusion. She is to be complimented. Your staff treated me with respect and cordiality. It was my pleasure to deal with your office. I would recommend you to anyone." Bryon D. Murgatroyd
View More
Send Us Your Review Review Us Online