We are now doing in-office conferences and signings and, with strict COVID guidelines as well as telephone and Zoom. Whether it is remote or in-person we are here to carry out our mission to help and serve our clients. 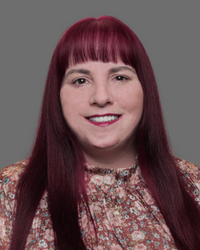 Rachael Lund joined Wilson and Wilson, LLC, as a paralegal in the LaGrange office. Rachael has been assisting families for the past several years with their estate planning needs in the States of Illinois, Indiana, Wisconsin, Michigan, and Florida.

Rachael is a veteran to the legal field. She has been working with attorneys since 1993 in her capacity as a paralegal. In 2000, Rachael attended Bethel College and received her bachelor’s degree in Paralegal Studies, then further went on to take the paralegal bar exam in 2004 where she received recognition as a certified paralegal by the States of Illinois and Indiana.

Rachael is a resident of Michigan City, Indiana, and has been commuting to work in Illinois for nearly 30 years. Aside from being a fulltime career woman, Rachael is also a fulltime wife and mother, as well as a mother of a special needs son who happens to have down syndrome. She and her husband have six children together ranging in ages from 8 to 24. They enjoy spending time with their children, hosting family dinner every Sunday, and creating new family traditions

Contact Us
Practice Areas
Newsletter Signup
Sign Up to Receive our Free Newsletter
Client Reviews
★★★★★
"We just received the refund from the facility today. Thank You so very much for all your help with my Mom's file. You and the staff at Wilson & Wilson Estate Planning & Elder Law LLC are outstanding people. It is an Honor to have your law office represent us. I would like to keep in touch with you for future family business." Lou Spataro
★★★★★
"I have known Bill Wilson for years and referred the services of Wilson & Wilson Estate Planning & Elder Law LLC Law Offices to many of my clients. I know they will be met with compassion as well as excellent counsel which is important to families in stressful situations. Dealing with the families in crisis requires skills all of the staff at Wilson & Wilson Estate Planning & Elder Law LLC demonstrate every day." Andrea Donovon
★★★★★
"Bill and his team are outstanding! They are thoughtful, caring and able to handle virtually any estate-related matter. They can take complicated matters and make them simple to understand. And on simple matters, they get it done quickly and for a reasonable fee. I highly recommend the Wilson & Wilson Estate Planning & Elder Law LLC team." G.Grant Dixon III
★★★★★
"Sandra and Debbie were very friendly but also professional. They were very efficient and concise and were able to answer all my questions about the paperwork. I felt very comfortable and confident working with Sandra and definitely would recommend her services to friends and family." A.S.
View More
Send Us Your Review Review Us Online